Last week a truck driver died in a crash on Highway 133 in Doerun, Georgia. The wreck occurred around 9:30 AM. After running off the road, the truck overturned and caught fire. This accident was the second within four days involving a truck in Colquitt County. These two crashes are only a few examples of the growing trend of an increasing number of truck accidents in Georgia and around the nation causing injury or death.

Why Have Trucking Accidents Increased?

According to some sources, trucking accidents in Georgia and around the United States have increased due to the inaction of Congress. In 2009, trucking deaths were at one of the lowest levels they have ever been. This can largely be attributed to the financial crisis of 2008. Less products were on the road that were being transferred by truck, which meant fewer trucks to get in accidents. However, trucking accidents began to rise again in 2013. In 2013, the most recent year data is available, there were 3,964 fatalities involving large trucks with another 104,000 people injured resulting from trucking accidents. Of those fatalities, 157 people in the state of Georgia died from accidents with large trucks. 2014 saw a decrease in the deaths resulting from trucking accidents, but saw an increase in injuries and accidents overall.

In 2008, profits for trucking and shipping companies shrank greatly, which left these companies scrambling to find ways to recover their losses. This often meant longer hours for drivers, more drivers on the road and tighter deadlines which have all contributed to an increase in crashes.

Lobbying and special interest groups supporting the interest of trucking companies have petitioned Congress to allow trucks to haul heavier loads, to extend the length of tractor trailers, and increase the working hours of drivers.

In 2013, around the same time those fatalities from trucking accidents spiked, the Federal Motor Carrier Safety Administration enacted a regulation that limited the maximum amount of time truck drivers could be on the roads. The regulation reduced the amount of hours truckers could drive on the roads from 82 to 70 hours. Lobbying groups lashed back at this proposal, claiming that the regulation actually made the roads more dangerous, because it meant more drivers on the road at one time. However, even though Congress may pass laws on highway safety for truck drivers, it does not necessarily mean that these laws are obeyed.

Drivers for independent companies or smaller trucking firms often elect to ignore the regulations imposed by Congress, particularly when it comes to health and rest rules. The drivers feel incredibly high pressures and feel that they cannot stop to take a break, and instead, most drive as far and as fast as they can in a short time span. Truck drivers adopt dangerous habits because they feel that these risks are worth the reward.  In 2015, 46 percent of drivers violated their hours of service rules, meaning that they drove more than the limit established by the federal government.

Independent drivers are often paid by the load and not by the number of hours they work, so many of these drivers believe that the more loads they can transport in the week the more money they will make.

Most trucking companies require their trucks to have $750,000 in liability coverage. However, for catastrophic injuries, this number is hardly sufficient. Medical bills can rise into the hundreds of thousands and if there is a death that results from the accident, this dollar amount can go into the millions. For example, a case in Virginia resulted in a $41 million verdict after a woman lost her family in a trucking accident. The financial consequences of inadequate insurance coverage can mean a victim of an accident may have to take less money than they deserve for compensation. Some drivers who are independent may not even carry insurance to avoid the expense. However, if a driver does not have insurance it becomes even more difficult for an injured individual to recover.

Who Is the at Fault Party in a Trucking Accident?

If you have been injured in an accident with a truck or a tractor trailer, you will likely want to find someone who can compensate you for your injuries. The first clear direction to place the blame will be the driver of the truck itself. However, unlike a regular car accident, truck drivers are often in accidents while they are under the employment of a company or another individual.

Depending on the case it may be possible to include the company the truck driver works for as a defendant. While many truck accidents are based on lack of sleep or drivers manipulating schedules, it may also be possible that the truck had a defect itself. If that is the case, you may have a case against the company that employed the driver, the driver, and whichever company manufactured the truck. The more companies, parties, and individuals that are sued in the same action, the more complicated the case becomes.

Have You Been Injured in Georgia in an Accident With a Truck?

If you have been injured in an accident in Georgia involving a large truck, you need to take action quickly to protect yourself. One of the best things that you can do is to call the experienced Georgia truck accident attorneys at the Law Office of John B. Jackson. Our legal team will handle your case with care and diligence, and will not give up until a fair resolution is reached. Contact us today to schedule your free case consultation and get started. 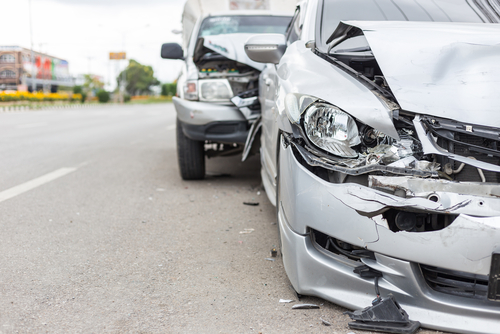 Ask a Douglasville Auto Accident Lawyer: Will Insurance Cover My Crash If My License Was Expired?

How to Amend a Georgia Police Report

Why Do I Have Severe Headaches After a Car Wreck in Atlanta, GA?